We can’t truly call a kitchen a kitchen until we include all of the essentials and condiments that are utilized in it. The interesting thing about kitchen basics is that some of them are practically identical or can be used interchangeably.

However, some of these ingredients cannot be used interchangeably. Cornstarch and baking soda are two examples of this. Many people are perplexed by the difference between the two. While some individuals believe they are the same, others remain undecided.

Is there a difference between cornstarch and baking soda? Is it possible to utilize them interchangeably?

Although these two look similar, they are not the same thing and should not be used in place of another. The difference between these two is that baking soda act as a leavening agent, while cornstarch acts as a thickening agent.

Cornstarch, often known as corn flour, is simple starch obtained from corn. The white endosperms found in the core of a corn kernel are used to make it.

The endosperms are ground into a fine white powder, which is then used as a thickening agent in the process. Corn starch is a gluten-free product since it includes solely carbohydrates and no protein.

Baking soda is one of the most common leavening agents used in baked goods. This household condiment, also known as sodium bicarbonate, is a chemical substance.

Baking soda is classified as a salt since it has a “sodium cation” and a “bicarbonate anion”. Baking soda’s use can be dated back to the 1940s when it was first manufactured, and it has remained one of the few household necessities we cannot do without.

The Differences Between Cornstarch And Baking Soda

Here are the main things to know about cornstarch and what sets it apart from baking soda.

Here are the main things to know about baking soda and what sets it apart from cornstarch. 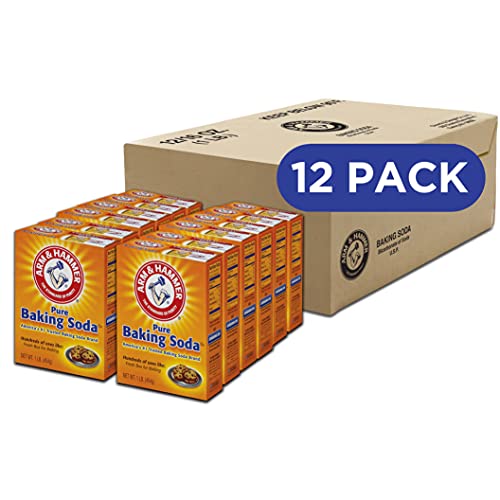 Tap this link to get our recommended baking soda.

What can be used in place of baking soda? If you don’t have any baking soda on hand and are in desperate need of substitution, baking powder is the finest option.

Baking powder isn’t as strong as baking soda, so you’ll need to use a lot of it to get the same outcome. Baking soda can be replaced with other substances such as baker’s ammonia, potassium bicarbonate, salt, self-rising flour, and so on.

What Can Be Used In Place Of Cornstarch?

The following are staples that can be used in place of cornstarch. They are; flour, potato starch, tapioca flour, rice flour, wheat flour, arrowroot flour, etc.

What Happens If You Leave Baking Soda Out Of A Recipe?

Leaving baking soda out of a recipe will prevent the cake or cookies from rising and fluffy. However baking powder can be used in place of baking soda but in a larger quantity.

Can I Use Vinegar Instead Of Baking Soda?

No, vinegar cannot be used in place of baking soda, when baking. However, when mixed, they produce a great leavening effect in both cakes and cookies.

Cornstarch and baking soda are two different kitchen items that can be used for baking and cooking, however, they function differently.

You must know that while one is a leavening agent, the other is a thickening agent.